Breast milk is the best source of nutrients for infants and the benefits of breastfeeding go beyond basic nutrition during the growing season. Breast milk provided by healthy, well-nourished mothers is the best food available for full-term infants of healthy mothers. Significant breastfeeding is suggested during the first six months of an infant's life, with continued breastfeeding accompanied by appropriate complementary feeding until the age of 2 or beyond one year.

Malnutrition is a condition of the body where it does not gain required energy, protein and nutrients which results in the improper functioning of the body drawing its own reserves. The body is then in a state of nutritional deficiency that, in the long run, leads to malnutrition. The term maternal nutrition draws attention to women as mothers, their nutritional status as it relates to the care and education of young people.

The breast milk containing the energy, protein and the other nutrients is the result of her body reserves or on her diet. The process known as burnout is the condition where, if a mother who has no ample required energy and nutrients provided in her diet, gets to reduce her own energy and nutrient store. There are many states that aid the mothers that barricade the above effects and the crucial one is the appetite. The appetite, in general, is high in the mother during pregnancy and breastfeeding.

Increasing food intake helps to meet the other requirements of pregnancy and breastfeeding. The extra food should, therefore, be available to the mother.

All malnourished mothers can follow the same breastfeeding recommendations as non-malnourished mothers. The mother should be feeding the baby for the initial 1-6 months which is a must and followed as per the requirement and thereby should acquaint the baby with complementary foods. It's natural in thinking that the quantity of milk gets reduced due to dietary deficiency. The resulted deficiency might be resulting in the standard quality. Researches state that a high quantity of breast milk produced depends on how repeatedly the baby breastfeeds. Incase if the mother has not produced good enough, the baby tries sucking more repeatedly. This further stimulates milk production.

The state of feeding the malnourished mother is easier, safer and less cost-effective rather than giving the milk substitutes to the baby. It is said that the maternal diet influences the nutritional composition of breast milk. Studies indicate that milk production and breastfeeding require more energy from the body.

On the baby’s requirement, the mother's body produces the quantity and quality milk. If the mother is having a moderate nutritional shortage, the above factors would be limited or do not affect. Thus, in case the mother consumes her food in a smaller quantity or even lesser in a day the milk does not get affected in quality and quantity. The availability of the milk is favored by drawing the mother’s reserves. Prolactin and Oxytocin are the hormones influencing the production of milk to feed the baby in a mother.

The initial milk produced from is called immunoglobulin rich IgA colostrum, which covers the gastrointestinal tract. This IgA helps to protect the infant in the initial stages until the baby starts developing the immune system. The IgA colostrum also includes the mild laxative, removing the meconium and thus helps in avoiding the bilirubin build-up which is a contributing factor leading to jaundice. The studies state that breastfeeding mothers in a developing country can produce the required quantity and quality of milk even after nutritional difficulties which is analogous to the mothers in developed countries.

A mother may not produce enough breast milk for several reasons. The most common reasons are that you pump enough to not breastfeed and some medications (including hormonal contraceptives containing estrogen), illness and dehydration.

The composition changes after one meal and also during the lactation period. The mother produces colostrum in the early stages of delivery, which is rich in protein and antibodies that give the baby passive immunity and even helps the newborn's digestive system to develop and function properly. The colostrum gradually turns into ripe milk. During the first three or four days, it appears thin and liquid and has a very sweet taste, the following milk turns to be thicker and creamier. The mother’s milk pacifies thirst of the new-born baby and even the hunger providing the required sugars, proteins, minerals and antibodies. 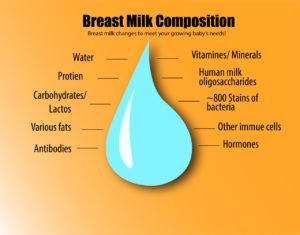 The initial breastmilk has rich sources of IgA from the 10th day to 7.5 months post-delivery. The breast milk comprises 0.8-09% protein, 4.5% fat, 7.1% carbohydrates and 0.2% ash (minerals). The carbohydrate content is the main content that is lactose; many lactose-based oligosaccharides are found in minor components. There are specific TGA of palmitic acid and oleic acid (O-P-O) which are the constituents of fat. There are also lipids having trans bonds. Human breast milk is enriched with some compounds like the conjugated linoleic acid (CLA) accounting for 6% of fat.

Breast milk contains a unique type of sugar: the mother's milk oligosaccharides (HMOs) that are not present in infant formula. HMOs are not digested by the infant but contribute to the constitution of the intestinal flora. HMO’s are the vital receptors blocking the pathogens which are responsible for disease-preventing infectious disease. The HMO’s helps in developing the immune cell responses resulting in benefiting the child. The researchers have invented more than 100 different varieties of HMO’s till date. The quantity and the composition vary in women and the HMO might have a sovereign objective.

The members of the house and others must be aware of the importance of the dietary supplements and provide them prior to pregnancy, while pregnant, during the breastfeeding and while in the therapeutic interval, when the mother is neither pregnant nor breastfeeding. The wholesome food with all required nutrients must be made available to the mothers residing in cultural restrictions. The nutritious food must be provided to all the teenagers, pregnant ladies, and lactating mothers to improvise their health and their offspring.

Its an exception in case of extreme malnourished mothers, but rest mothers can provide enough quantities of breastfeeding to the infants. We can provide healthy and nutritious food to the lactating mother if she is undernourished, rather than feeding the infants with other substitutes. The mother should be fed with all required high nutrition food to improve the quality and the quantity of milk. Slight deficiencies in micronutrients might affect the milk quality. Lactation is very much in demand for energy and protein for mothers.

The provisions of lactating mothers richer in proteins and energy must be managed, well-established and restored. Delay in first birth and child spacing assures to restore the maternal preserves and allowing for the healthier pregnancy and breastfeeding.